Blast from the past 1: Chefax C1

Not many people know it and even less probably remember it, but a few years ago I was on a quest to build a damn awesome operating system (confession: I still am, I just don't have the time or the tools, at the moment). But I started the project and started coding it. Today I was poking around and found an early screenshot of it booting on VMWare.
(Sorry, only in Portuguese) 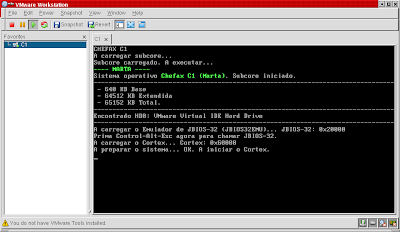 This was a project I started before enrolling in the university that I migrated to the first attempt I had at creating a project incubator: the Chefax I&D group. Later, when I left the university (and consequentially, Chefax I&D) I took the project with me and brought it to Onda Technology.

Those were fun days. In a time when coding had class instead of swag.

PS: No, "Marta" was not the name of a girlfriend, it was the name of my baby goddaughter.
Publicada por João Paredes à(s) 23:06

Places you should check